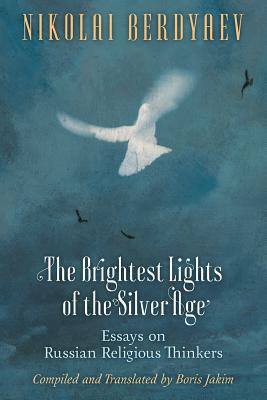 The Brightest Lights of the Silver Age: Essays on Russian Religious Thinkers

The great Russian philosopher Nikolai Berdyaev set for himself the task of revealing to the western world the distinctive elements of Russian philosophy: its existential nature, eschatologism, religious anarchism, and preoccupation with the idea of Divine Humanity. In the present collection of essays (the first volume of Berdyaev's essays ever to appear in English translation), he attempts to define "the new religious consciousness" as it emerged in Russia in the first decade of the 20th century. Berdyaev, like Merezhkovsky and Blok (among others), believed that the dawn of the new century would bring an end to the old atheistic and positivistic world-view and the beginning of a new era of the spirit. The other essays treat such figures as Tolstoy, Solovyov, Rozanov, Bely, Florensky, and Bulgakov--all of them giants of Russian religious thought.

"Nikolai Berdyaev's essays, like his longer works, are always insightful, penetrating, passionate, committed--expressions of the whole person. They are as intensely alive now as when they were first written. In them Berdyaev enters into genuine dialogue with his fellow thinkers from the great period of Russian religious philosophy. We are indebted to Boris Jakim for the excellence of both the selection and the translation."--RICHARD PEVEAR, translator of War and Peace and The Brothers Karamazov

"Nikolai Berdyaev managed to play two roles in the Russian religious renaissance of the twentieth century. He was a passionate participant in the movement, but also one of its astute critics. His genius in both roles is on full display in this collection of essays assembled and beautifully translated by Boris Jakim. Berdyaev's portraits of his peers provide us with a concise, colorful, and deep-thinking compendium of all the main themes that occupied the Russian religious thinkers of his generation--the last generation to come of age in Russia before the Revolution of 1917. With the centennial of that great upheaval at hand, we can see more clearly than ever the relevance of revisiting religious-philosophical debates which, far from being over, retain their freshness as vehicles for thinking not just about the future of Russia but about the spiritual challenges facing the modern world."--PAUL VALLIER, author of Modern Russian Theology: Bukharev, Soloviev, Bulgakov

"Nikolai Berdyaev, the existentialist Russian philosopher of freedom and creativity, in this collection of selected essays on key figures representative of Russia's Silver Age, is unabashed in both his praise and criticism of them. Lyrical is his style, his analyses are no less cogent and cutting at times. The translator, Boris Jakim, has taken careful pains in his effort to bring out the best in Berdyaev's literary and social criticism as he discusses the thought of such notables as Dmitry Merezhkovsky, Lev Tolstoy, Vladimir Solovyov, Vasily Rozanov, Lev Shestov, Alexander Blok, Pavel Florensky, and Sergius Bulgakov, along with a penetrating essay on theosophy and anthroposophy in Russia."--ROBERT F. SLESINSKI, author of Pavel Florensky: A Metaphysics of Love

Title:: The Brightest Lights of the Silver Age: Essays on Russian Religious Thinkers

The Brightest Lights of the Silver Age: Essays on Russian Religious Thinkers