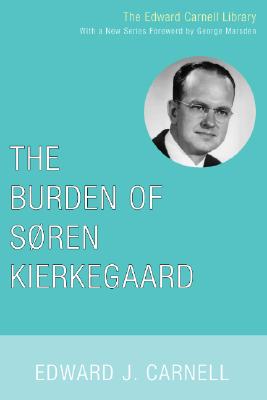 Although the wide influence of Soren Kirkegaard's writings upon modern Christian thought is now generally recognized, the insights of the Danish knight of faith have often been misread and misinterpreted by those who seek to canonize their own theologies by appealing to Kierkegaard. The fact that modern Christian thought owes much to Kierkegaard does not mean that modern Christian thought speaks fo Kierkegaard at all points. In this short study, Carnell has allowed Kierkegaard to speak for himself, thus providing a valuable glimpse into the thought of the great Danish philosopher-theologian. Restricting the number of critical comments (including a short closing chapter entitled Yes and No), Carnell has written a short survey of Kierkegaard's thought with generous documentation from his writings. The two major theses which the author discusses are existential living and Truth is subjectivity. He elucidates the latter thesis by explaining the four affirmative elements in Kierkegaard's idea of subjective truth: faith, suffering, hope, and love. Carnell concludes by stating that because Kierkegaard strove to enrich the body of Christ by developing a fresh interpretation of spiritual truth, his books should be read, and read again. This volume will do more than encourage readers to do that; it will help them when they do. In this welcome collection of the books and essays of Edward J. Carnell, we are offered an inside view of a radical shift in American religious thinking -- the emergence of twentieth-century evangelicalism out of Protestant fundamentalism. While there may be room for disagreement on the relevance of Carnellian apologetics for our post-modern age, there should be no doubt about the historical importance of Carnell's role in a period of tension and risk. Wipf and Stock deserves our thanks for making this series available. Rudolph Nelson, author of The Making and Unmaking of an Evangelical Mind: The Case of Edward Carnell Edward John Carnell was an ordained Baptist minister, born in Antigo, Wisconsin. For three years he served as Associate Professor of Philosophy of Religion at Gordon Divinity School. He was appointed as the second President of Fuller Theological Seminary from 1954 to 1959. Carnell resigned his position in 1959 to give himself fully to teaching, serving as Professor of Apologetics at Fuller for eight additional years.