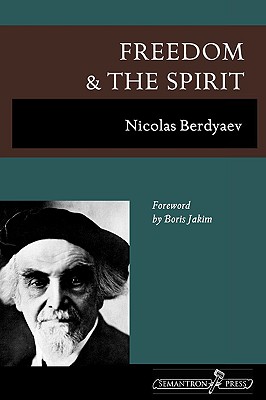 Freedom and the Spirit

Nicolas Berdyaevâ€™s â€œnew ethicsâ€ encompasses not only knowledge of good and evil but also of the tragic, which, in his words, â€œis constantly present in moral experience and complicates all our moral judgments.â€ It is an ethics that emphasizes the personality, an ethics that arises in freedom and strives for compassion. Consistent with the whole of Berdyaevâ€™s work, creativity not only animates but interprets moral life, bearing witness to manâ€™s vocation as collaborator with God in the work of instituting goodness in the world. True creativity, he maintains, is not concerned with the new but with the eternal. â€œEternity is attained in the actual moment, it comes in the present,â€ he writes. â€œEternity is not a cessation of moment and of creative life; it is creative life of a different orderâ€¦it is a mystery play of the spirit which embraces the whole tragedy of cosmic life.â€ In essence, Berdyaevâ€™s is an ethics of Divine Humanity. He seeks to move beyond simplistic thinking about evil by recognizing its complicated nature. â€œIf evil has a positive meaning and does not result in everlasting hellâ€¦evil proves to be an unrealized form of the good.â€ This â€œgoodâ€ lies solely in â€œthe enrichment of life brought about by the heroic struggle against it [evil] and the victory over itâ€â€”that is, evilâ€™s transfiguration and redemption.

In this book, Berdyaev tells us that the creative development of the spirit and the free exercise of man's powers can be conceived only as the free cooperation of man with the work of God. Creative spiritual development represents a new principle which signifies an offering of human freedom to God, an offering which God expects from us. The life of the spirit is a creative and dynamic process. Spiritual development is possible only because there is freedom. Spiritual development is not movement on the plane of the external world, but the bringing to birth of forces which lie hidden in the inner depths of existence. To quote Berdyaev, "the spiritual world is like a torrent of fire in free creative dynamism." The Russian philosopher Nikolai Berdyaev (1874-1948) was one of the greatest religious thinkers of the twentieth century. His philosophy goes beyond mere thinking, mere rational conceptualization, and tries to attain authentic life itself: the profound layers of existence that are in contact with God's world. Berdyaev directed all of his efforts, philosophical as well as in his personal and public life, at replacing the kingdom of this world with the kingdom of God. According to him, we can all attempt to do this by tapping the divine creative powers which constitute our true nature. Our mission is to be collaborators with God in His continuing creation of the world. This is what Berdyaev said about himself: "Man, personality, freedom, creativeness, the eschatological-messianic resolution of the dualism of two worlds - these are my basic themes."

Title:: Freedom and the Spirit

Freedom and the Spirit