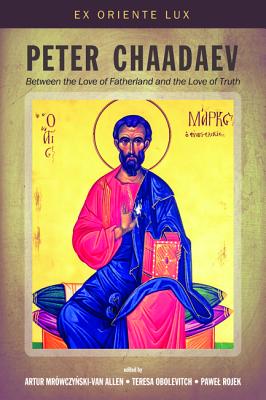 Peter Chaadaev: Between the Love of Fatherland and the Love of Truth (Ex Oriente Lux: New Perspectives on Russian Religious Philosophers)

Peter Chaadaev (1794-1856) is rightfully considered to be one of the forerunners of modern Russian philosophy. There is a famous scene from his life that may help us to understand both his own thought as well as the whole subsequent tradition of Russian religious philosophy. When Chaadaev finished his studies of Kant's Critique of Pure Reason, he crossed out the title on the cover and wrote beneath it Apologete adamitischer Vernunft (An Apology for Adamic Reason). Russian religious philosophy was supposed to be a critique of such secular reason. In this book we seek a contemporary interpretation of Chaadaev's thought and its influence. Our authors, including such scholars as Andrzej Walicki and Boris Tarasov, investigate his views on religion, society, history, politics, and Russian fate. Chaadaev turns out to be a crucial figure who continues to influence Russian religious philosophy to this day. ""Nicolas Berdiaev credited Chaadaev with 'the awakening of independent original Russian thought.' Indeed, his main themes have ever since been at the center of Russian philosophy. As a Christian philosopher Chaadaev cherished love of truth over love of fatherland, which, he said, 'feeds national hatreds' and 'sometimes covers the earth with mourning.' This volume is an important contribution to the study of his enduring legacy, for Russia and the world."" --Randall A. Poole, Professor of History, College of St. Scholastica ""Modern Russian religious thought begins with Chaadaev. While his output was small, its impact was far-reaching. Khomiakov, Kireevsky, Herzen, Soloviev, Berdiaev and many others were indebted to Chaadaev in one way or another. He merits the careful attention the authors of this volume devote to him."" --Paul Valliere, Professor Emeritus, Butler University Artur Mrowczyński-Van Allen is Professor at the International Center for the Study of the Christian Orient and Instituto de Filosofia ""Edith Stein,"" Granada, Spain. He is the author of Between the Icon and the Idol: The Human Person and the Modern State in Russian Literature and Thought (Cascade, 2013). Teresa Obolevitch is Professor at the Pontifical University of John Paul II in Krakow, Poland. Recently she published La philosophie religieuse russe (2014) in French and Semen Frank: Shtrikhi k portretu filosofa in Russian (2017). Pawel Rojek is Assistant Lecturer at the Jagiellonian University in Krakow, Poland.

Title:: Peter Chaadaev: Between the Love of Fatherland and the Love of Truth (Ex Oriente Lux: New Perspectives on Russian Religious Philosophers)

Peter Chaadaev: Between the Love of Fatherland and the Love of Truth (Ex Oriente Lux: New Perspectives on Russian Religious Philosophers)