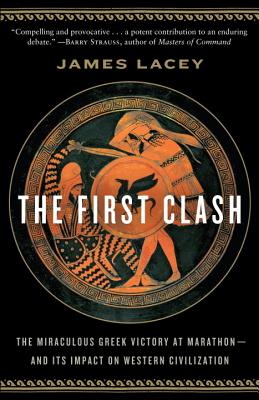 The First Clash: The Miraculous Greek Victory at Marathon and Its Impact on Western Civilization

"A compelling and provocative read . . . With a soldier's eye, Jim Lacey re-creates the battle of Marathon in all its brutal simplicity."--Barry Strauss, author of Masters of Command Marathon--one of history's most pivotal battles. Its name evokes images of almost superhuman courage, endurance, and fighting spirit. In this eye-opening book, military analyst James Lacey takes a fresh look at Marathon and reveals why the battle happened, how it was fought, and whether, in fact, it saved Western civilization. Lacey brilliantly reconstructs the world of the fifth century B.C. leading up to the astonishing military defeat of the Persian Empire by the vastly undermanned Greek defenders. With the kind of vivid detail that characterizes the best modern war reportage, he shows how the heavily armed Persian army was shocked and demoralized by the relentless assault of the Athenian phalanx. He reveals the fascinating aftermath of Marathon, how its fighters became the equivalent of our "Greatest Generation," and challenges the legacy and lessons that have often been misunderstood--perhaps, now more than ever, at our own peril. Immediate, visceral, and full of new analyses that defy decades of conventional wisdom, The First Clash is a superb interpretation of a conflict that indeed made the world safe for Aristotle, Plato, and our own modern democracy. "With a fresh eye to tactics, strategy, and military organization, and with his text grounded in direct experience of the troops on the battlefield, James Lacey gives us not only new understanding of how the Athenians managed to win but also a greater appreciation of the beginning of a long tradition of Western military dynamism that we take for granted today."--Victor Davis Hanson, author of Carnage and Culture

"Lacey's swords-and-shields approach will absorb readers ever fascinated by the famous battles of antiquity."--Booklist

"Exemplary . . . Lacey, a veteran of the 82nd and 101st Airborne divisions and a professor at the Marine War College, brings to the tale of Marathon the practical experiences of the combat soldier and an intellectual sensibility."--The New Criterion

Title:: The First Clash: The Miraculous Greek Victory at Marathon and Its Impact on Western Civilization

The First Clash: The Miraculous Greek Victory at Marathon and Its Impact on Western Civilization