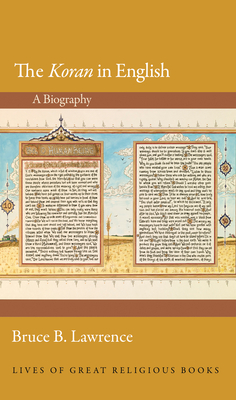 The Koran in English: A Biography (Lives of Great Religious Books)

By: Bruce B. Lawrence

For millions of Muslims, the Qur'an is sacred only in Arabic, the original Arabic in which it was revealed to the Prophet Muhammad in the seventh century; to many Arab and non-Arab believers alike, the book literally defies translation. Yet English translations exist and are growing, in both number and importance. Bruce Lawrence tells the remarkable story of the ongoing struggle to render the Qur'an's lyrical verses into English--and to make English itself an Islamic language.

The "Koran" in English revisits the life of Muhammad and the origins of the Qur'an before recounting the first translation of the book into Latin by a non-Muslim: Robert of Ketton's twelfth-century version paved the way for later ones in German and French, but it was not until the eighteenth century that George Sale's influential English version appeared. Lawrence explains how many of these early translations, while part of a Christian agenda to "know the enemy," often revealed grudging respect for their Abrahamic rival. British expansion in the modern era produced an anomaly: fresh English translations--from the original Arabic--not by Arabs or non-Muslims but by South Asian Muslim scholars.

The first book to explore the complexities of this translation saga, The "Koran" in English also looks at cyber Korans, versions by feminist translators, and now a graphic Koran, the American Qur'an created by the acclaimed visual artist Sandow Birk.

Title:: The Koran in English: A Biography (Lives of Great Religious Books)

The Koran in English: A Biography (Lives of Great Religious Books)