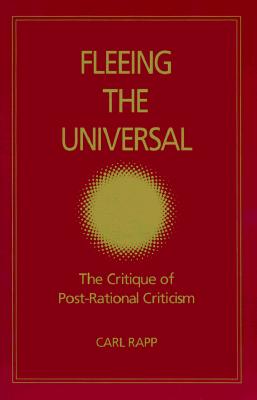 Fleeing the Universal: The Critique of Post-Rational Criticism

Fleeing the Universal takes issue with the popular view that contemporary literary and cultural theory has brilliantly effected, or at least brilliantly reported, the demise of philosophy and the emergence of a new post-philosophical culture. It offers a critique of the various options presented by "post-rational" critics and theorists and, at the same time, argues for the superiority of speculative philosophy to all these options. Further, it demonstrates that the chief problems with post-rationalism were already seen, before our time, by two speculative philosophers, Hegel and Santayana, both of whose systems of philosophy are primarily intended to avoid the problems that beset the critique of reason.

Fleeing the Universal criticizes the arguments and methods of deconstruction, the new pragmatism, and New Historicism, and suggests that the alternatives to post-philosophy developed by Hegel in the early nineteenth century and by Santayana in the early twentieth century have not been superseded by any theory associated with the culture of postmodernism or the analytical techniques of poststructuralism.

Title:: Fleeing the Universal: The Critique of Post-Rational Criticism

Fleeing the Universal: The Critique of Post-Rational Criticism