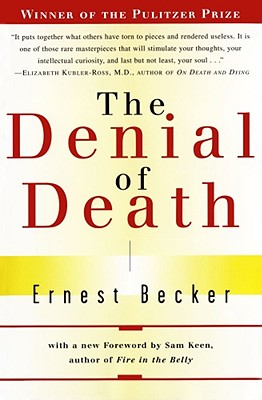 The Denial of Death

William James referred to death as 'the worm at the core'' of man's pretensions to happiness. We are self-aware creatures whose minds can take in the universe, yet we must, without exception, return to dust. In this Pulitzer Prize-winning classic, cultural anthropologist Ernest Becker explores the many ways in which man attempts to avoid the terror and inevitability of death. Becker contends that the ''denial of death'' pervades human culture and is one of the deepest sources of intolerance, aggression and evil. Drawing upon a diverse array of psychological and philosophical sources, Becker argues that anxiety about our mortal condition leads us to undertake a variety of projects to create an illusion of immortality. He posits that one of the main functions of culture is to aid in the creation of such illusions. Identification with one or another ''immortality system,'' Becker believes, often leads to polarizations, with frequently disastrous consequences. Thus, Muslims attack Christians, Protestants attack Catholics, and humanists and the religious attack one another; each attempting to establish their own unique version of reality by suppressing that of others. The list of such conflicts goes back and forth endlessly. Becker's cultural observations are particularly compelling. Though the book is not a ''spiritual'' work in the usual sense, Becker's conclusion that the self must be ''brought down to nothing'' in order to move on to the possibility of ''cosmic heroism'' certainly opens the door toward a fundamental humility and the possibility of a transcendent reality. It's the bad news without which the Good News makes little sense.

Winner of the Pulitzer prize in 1974 and the culmination of a life's work, The Denial of Death is Ernest Becker's brilliant and impassioned answer to the "why" of human existence. In bold contrast to the predominant Freudian school of thought, Becker tackles the problem of the vital lie -- man's refusal to acknowledge his own mortality. In doing so, he sheds new light on the nature of humanity and issues a call to life and its living that still resonates more than twenty years after its writing.

Title:: The Denial of Death

The Denial of Death