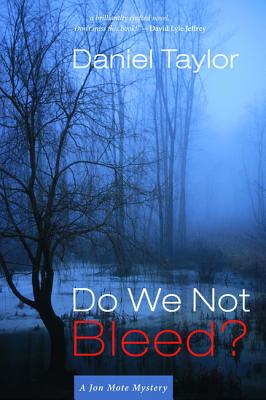 Do We Not Bleed?: A Jon Mote Mystery

A young woman is dead. A man with diminished capacity is accused. His friends, also wounded, try to help him. In the process, they teach Jon Mote a thing or two he desperately needs to learn.

Jon no longer hears voices, but he's not convinced a silent universe is much better than a haunted one. He's returned his sister Judy to her group home and taken a staff job there that puts him in the company of six folks who, a bit rebelliously, he calls Specials.

Jon thinks his job is to teach these people basic life skills like telling time, making change, and riding the bus. The world says they are to be pitied, perhaps even eliminated. At best taken care of. But he finds that Judy, Ralph, Bonita, Jimmy, Billy the Skywatcher, and J. P. possess something that he and the world badly need.

The accused, J. P., is a gentle man who can't tell time or temperature, but wants you to be happy. Is he also a killer? The bureaucracy judges him so and sends him to an institution for the criminally insane. His friends know that if they do not get him back he will wither and die.

Meanwhile, Jon has his own problems. He finds himself threatened not so much by disintegration as by normality--the meaninglessness of the mundane. Alive but trivial.

While searching for something to fill the emptiness and for a way to rescue his client and friend, Jon unexpectedly reconnects with his estranged wife, Zillah, and he has an unsettling encounter with an unusual nun who presents him a way of seeing the world that puzzles and intrigues him.

"This is a brilliantly crafted novel. Not only is Daniel Taylor a master of plot and subplot, but he also weaves threads together toward surprising and ironic revelations that delight and amaze. Yet his highest achievement may be the creation of a metonymic character who, in many ways, is a diagnostic for our culture and times. In this sequel (of sorts) to Death Comes for the Deconstructionist, Jon Mote the accidental detective returns in a distinctly nonacademic setting, not just to find out 'whodunit' but to discover the unexpected opening of his own being to real love--love in a new and revolutionary light. Don't miss this book "

"Daniel Taylor does it again, showing there is life after (his earlier) Death Comes for the Deconstructionist. Do We Not Bleed? reconstructs Jon and Judy Mote in ways that precipitate our laughter, inspire our imagination, and even prompt our thinking--about literature, philosophy, religion, theology, and life, no less--all the while helping us see that we are no more normal than Jon but certainly no less special than Judy and her friends. These two must-read novels leave us wondering how many more lives, and deaths, Jon and Judy Mote have left."

--Amos Yong, author of The Bible, Disability, and the Church

"The prophetic spirit of Walker Percy infuses this unusual whodunit about a lost man stumbling unawares toward love in the ruins of both his own life and the postmodern world. As in his memorable debut, Daniel Taylor's disarmingly shrewd Christian humanism diagnoses the disorders characteristic of our time, and points the way toward healing."

--Rod Dreher, author of How Dante Can Save Your Life and The Little Way of Ruthie Leming

." . . not only a highly engaging murder mystery but also a metaphysical page-turner."

Title:: Do We Not Bleed?: A Jon Mote Mystery

Do We Not Bleed?: A Jon Mote Mystery