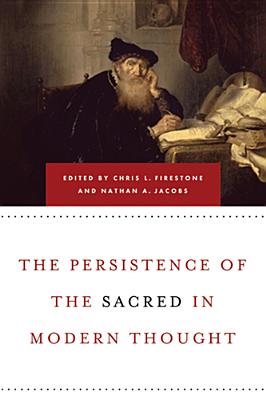 The Persistence of the Sacred in Modern Thought

In The Persistence of the Sacred in Modern Thought, Chris L. Firestone, Nathan A. Jacobs, and thirteen other contributors examine the role of God in the thought of major European philosophers from the seventeenth to the nineteenth century. The philosophers considered are, by and large, not orthodox theists; they are highly influential freethinkers, emancipated by an age no longer tethered to the authority of church and state. While acknowledging this fact, the contributors are united in arguing that this is only one side of a complex story. To redress the imbalance of attention to secularism among crucial modern thinkers and to consolidate a more theologically informed view of modernity, they focus on the centrality of the sacred (theology and God) in the thought of these philosophers. The essays, each in its own way, argue that the major figures in modernity are theologically astute, bent not on removing God from philosophy but on putting faith and reason on a more sure footing in light of advancements in science and a perceived need to rethink the relationship between God and world. By highlighting and defending the theologically affirmative dimensions of thinkers such as Thomas Hobbes, Gottfried Leibniz, John Locke, Immanuel Kant, F. W. J. Schelling, G. W. F. Hegel, and others, the essayists present a forceful and timely correction of widely accepted interpretations of these philosophers. To ignore or downplay the theological dimensions of the philosophical works they address, they argue, distorts our understanding of modern thought. Contributors: Nicholas Adams, Hubert Bost, Philip Clayton, John Cottingham, Yolanda Estes, Chris L. Firestone, Lee Hardy, Peter C. Hodgson, Nathan A. Jacobs, Jacqueline Mari a, A. P. Martinich, Richard A. Muller, Myron B. Penner, Stephen D. Snobelen, Nicholas Wolterstorff.

Title:: The Persistence of the Sacred in Modern Thought

The Persistence of the Sacred in Modern Thought